His position and argument can be summed up in the following sentence:

By an intuitive judgment that is based on moral experience and on a comparison with other ways of defending person's lives (eg., spying, physical harming someone else to keep them from killing people), it is evident to most people, and to all normal human beings that what Live Action did is right, and if you think otherwise, you're morally stupid, and care about principles or moral uprightness more than about people.

I'm not going to take a position on the legitimacy of what Live Action did, but I take a definite position on this manner of arguing: it is unsound, guilty of several classic fallacies, and uncharitable, arguing by ridiculing one's opponents.

1. Appeal to the people–because most people think its so, it must be so–or simply begging the question. Peter Kreeft premises: Most of my students immediately and firm conviction is that Dutchmen "were not wrong to deliberately deceive the Nazis about the locations of the Jews they had promised to hide". He then affirms that these students "know, without any ifs or ands or buts," that such Dutch deception is good, not evil, and that anyone who is more certain of a universal philosophical principle, from which he would conclude that such deception was wrong, "is not functioning as a human being but as a computer, an angel, a Gnostic, or a Kantian."

When we discuss Kant and the issue of lying, most of my students, even the moral absolutists, are quite certain that the Dutchmen were not wrong to deliberately deceive the Nazis about the locations of the Jews they had promised to hide. … They know, without any ifs or ands or buts, that such Dutch deception is good, not evil. If anyone is more certain of his philosophical principles than he is that this deception is good, I say he is not functioning as a human being but as a computer, an angel, a Gnostic, or a Kantian.

Here Kreeft is either (1) begging the point at issue, using his students merely as a illustration of that which he takes as a fact anyway, namely that whatever deception was realistically necessary to save lives (whether one uses the term "lying" or not) was good, or (2) arguing from the fact that the intuition of most persons is in favor of lying in such situations.

2. Begging the question and ridiculing your opponent: "Physical hiding and verbal hiding are two sides of the same coin, whether you call it lying, or deception, or whatever you call it. What it is, is much more obvious than what it is to be called. It’s a good thing to do. If you don’t know that, you’re morally stupid, and moral stupidity comes in two opposite forms: relativism and legalism. Relativism sees no principles, only people; legalism sees no people, only principles."

3. Argument by ridiculing your opponent: "If lying is always wrong, then it is wrong to lie to a nuclear terrorist (the “ticking time bomb” scenario) to elicit from him where he hid the nuclear bomb that in one hour will kill millions if it is not found and defused. The most reasonable response to the “no lying” legalist here is “You gotta be kidding”—or something less kind than that."

The closest analogy I can think of to Live Action’s expose of Planned Parenthood is spying. If Live Action is wrong, then so is all spying, including spying out the Nazis’ atomic bomb projects and saving the world from a nuclear holocaust.

This is a logically valid argument. Kreeft does not argue for the premise that spying is morally licit, but this premise is probably not disputed by those whom he is opposing. The more questionable premise is his supposition that the morality of spying is the same as that of lying. He does not give any argument for this, thus it is either simply assumed (begging the question) or assumed on the basis of majority opinion.

Peter Kreeft does give a certain argument in favor of the use of the argument from majority opinion in moral matters: because they deal with concrete realities, "moral experience, instinctive moral judgments about concrete situations by our innate moral common sense" has priority over "clear definitions of general moral principles and valid logical reasoning from them"

Several questions pose themselves in regard to this: (1) what do we do when faced with a moral situation, such as that of lying to save someone's life, where the instinctive moral judgment says it is morally right, and the instinctive moral judgment of others says that it is morally wrong? If we say that the instinct of the majority is right, it seems we would have to say that the use of artificial contraception is morally right, a conclusion Kreeft would not accept. In the Aristotelian and Thomistic account, it is not just anyone's instinctive judgment which is decisive, but the judgment of the virtuous man? Is Kreeft so sure of his virtue that he can say that one who denies that his instincts are correct are "morally stupid" and is "not functioning as a human being"?

I hope to return to the question of instinctive judgments and moral reasoning in a later post.

See also: A Response to Peter Kreeft, On Lying, posted on the New Theological Movement Blog, and Augustine vs the Priscillianists by Mark Shea, two other responses worth reading.

The Benedictine monks in Norcia, Italy, are offering a discernment program this Summer, July 4-29. This is the same town where the Summer Theology Program mentioned earlier will be held from June 20 to July 1.

The purpose of the program is to offer young men a time to discern God's will for their life in a more concentrated way than normal worldly circumstances permit. Attendees will be invited to participate in the life of the monks as a way to guide their decision. 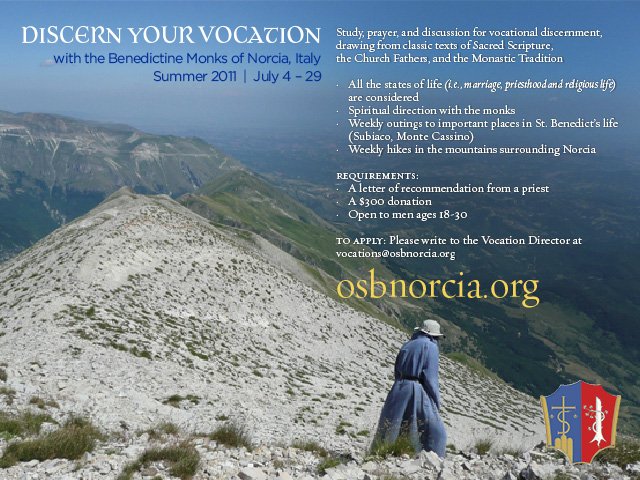 Discern Your Vocation with the Benedictine Monks of Norcia, Italy Summer 2011 | July 4 – 29

Study, prayer, and discussion for vocational discernment, drawing from classic texts of Sacred Scripture, the Church Fathers, and the Monastic Tradition
•    All the states of life (i.e., marriage, priesthood and religious life are considered
•    Spiritual direction with the monks
•    Weekly outings to important places in St. Benedict's life (Subiaco, Monte Cassino)
•    Weekly hikes in the mountains surrounding Norcia

REQUIREMENTS:
•    A letter of recommendation from a priest
•    A $300 donation
•    Open to men ages 18-30
TO APPLY: Please write to the Vocation Director at vocations@osbnorcia.org

Not a few of the blogs and news outlets mentioning the 1970 letter of Ratzinger and eight other theologians calling for a new and open discussion of the discipline of celibacy speak of it as though it were a call for the abolition of the law requiring celibacy of those to be ordained as priests. This is, however, a quite unjustified "reading into" the text of the letter, which states that those entering into the discussion should do so with an openness to whatever the outcome of a renewed and frank discussion of the issue might be, but explicitly refrains from proposing what the outcome of such a discussion should be (whether retaining the law regarding celibacy, or changing it).

Cardinal Walter Kasper, one of the other eight signatories to the letter, recently affirmed just that in an address to the Catholic University of Lisbon, namely that he had proposed a discussion of priestly celibacy, not its abolition. Moreover, he suggested that the discussions of celibacy that have taken place do not favor a need for change in the discipline.

"There have been three world synods that have spoken of celibacy, and it was decided to maintain this discipline, and I myself believe that celibacy is a good for the Church."

At present I don't have access to his full address. If I get it, I will post it or a link to it here.

I've translated the 1970 letter of Ratzinger and eight other theologians to the German bishops, which was republished in Pipeline 2/2010, under the title "A reminder to the signatories" (Den Unterfertigten zur Erinnerung), and which has been in a number of newspapers in the past few days.

Some of the parts of the letter that the newspapers for some reason or other aren't citing… :

I. … We are convinced that the freely chosen state of remaining unmarried in the sense of Matthew 19 not only presents a meaningful possibility of christian existence, one which is at all times indispensable for the Church as a sign of its eschatological character, but that there are also good theological grounds for the connection of the freely chosen unmarried state and the priestly office, since this office brings the officeholder definitively and completely into the service of Christ and his Church. In this sense we affirm what was recently said in the “Letter of the German Bishops on the Priestly Office” (See n. 45, par 4; n. 53, par 2). And in this sense we are also convinced that whatever the outcome of the discussion, the unmarried priesthood will remain an essential form of the priesthood in the Latin Church.

Such a positive stocktaking and working through of the problem must also occur because the reality of celibacy itself in the conditions of present-day publicity and society must be presented in an understandable and meaningful manner—so far as possible—granting all knowledge of very clear limits of this endeavor. It will remain a “scandal”, but this does not excuse one from promoting and recommending it with the best reasons, in the event that an examination is seriously undertaken and can arrive at positive results (see above, section 1). If we know that celibacy is primarily a fruit of spiritual experience, we must still, as representatives of the science of theology, draw attention to this positive, clarifying, and unavoidable function of an examination.